Štrekna is one of the most beautifully maintained bike paths that leads along an abandoned railway line.

The route is entirely paved and completely away from the rest of the traffic. Along the way, cyclists can rest at many stops and visit numerous attractions. Štrekna is a cycling route suitable for all types of cyclists.

The route can be shorter or longer, according to your choice. With a gentle and even slope, it is easier in the direction of Austria, as it descends most of the time.

For families with small children, we suggest starting in Mislinja and finishing in Slovenj Gradec, 10 km long in one direction (20 km in both directions, a slight ascent in the opposite direction).

Those with more strength in their legs can start it in Gornji Dolič and extend to Dravograd or further to Austria - 24 km (48 km in both directions).

Along the way, on the route between Velenje, Gornji Dolič, Mislinja, Slovenj Gradec, Otiški vrh, Dravograd and the bathing lake Labot (Lavamünd) in Austria, there is also a bus with a bicycle trailer during the weekends.

In Grof, we can take you with your bikes to the beginning of the planned route and also pick you up where your feet will no longer be able to pedal.

Attractions along the way 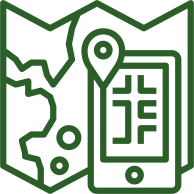